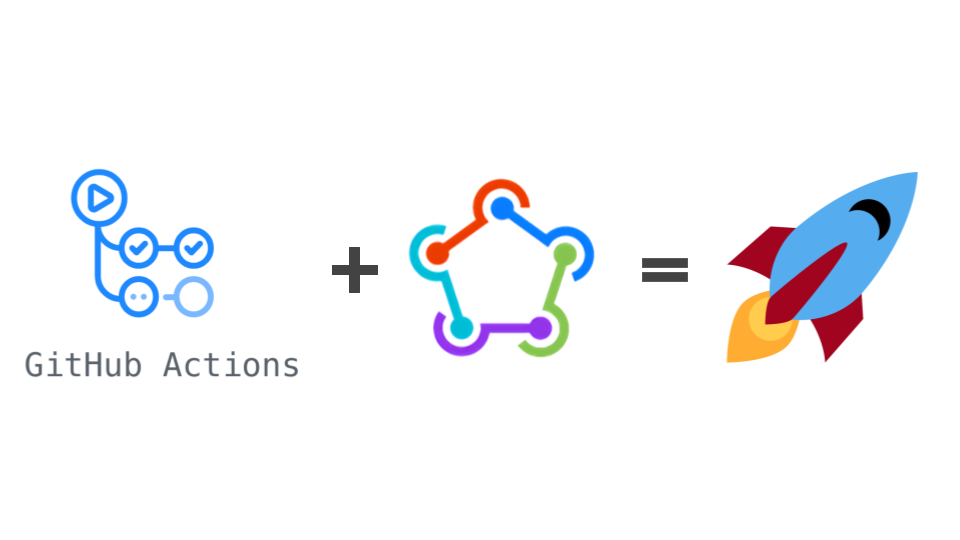 The Japanese version of this blog post can be found here:

In the last article, I introduced how to improve an API / Frontend deployment flow using GitHub Actions + GitLab Flow.

I also improved the continuous delivery process of an iOS app by using GitHub Actions, and I would like to introduce it in this article.

I believe this continuous delivery can be applied not only to iOS, but also to Android and other multi-platform frameworks such as Flutter.

In the last article, I mentioned that we adopted GitLab Flow for our API / Frontend deployment flow and branching strategy.

However, I thought that GitLab Flow or GitHub Flow would be incompatible with our mobile release process because of the following factors:

On the other hand, some companies use trunk-based development as the release flow for mobile apps.

However, trunk-based development more suitable for relatively large-scale app development and deployment schedules, such as releasing once a week, and I thought that it did not match the current state of our mobile development.

For the above reasons, I chose Git Flow, for our mobile app deployment flow branching strategy. 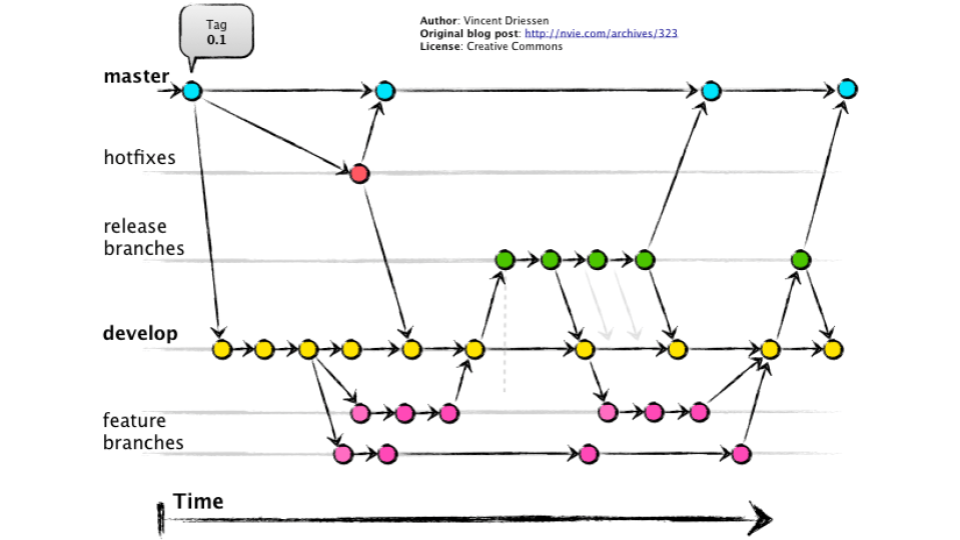 To make the rest of this explanation easier to understand, let's take a brief look at Git Flow. 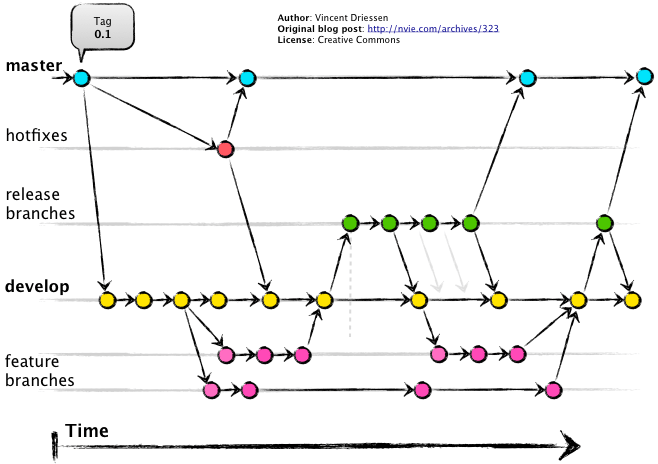 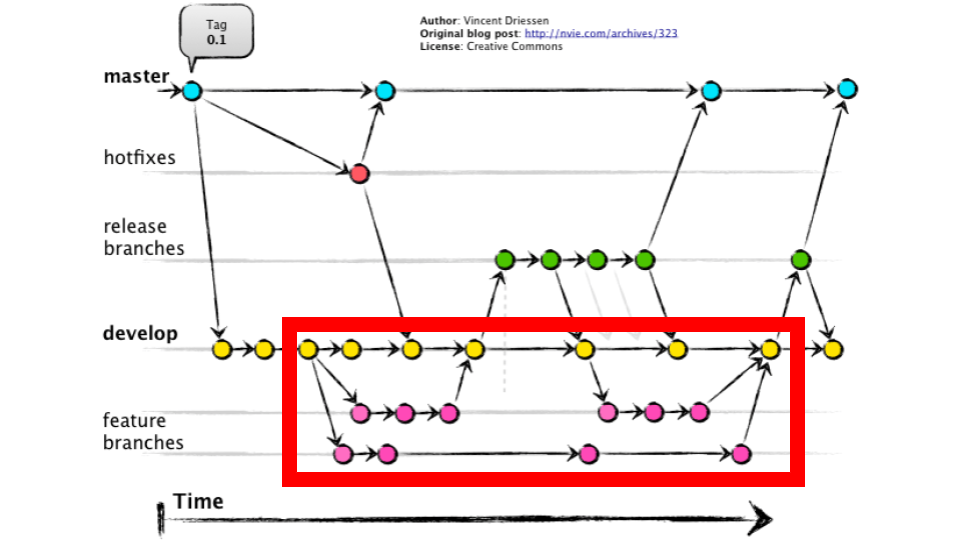 ② Create a release branch from the develop branch when it's ready for preparing the release. 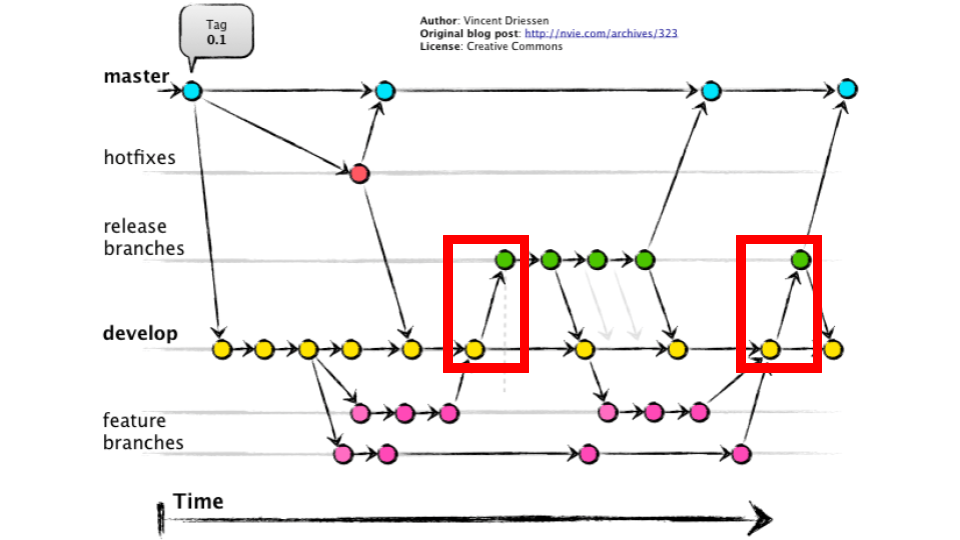 ③ After some checks and modifications on the release branch, merge this to the develop・master branches. 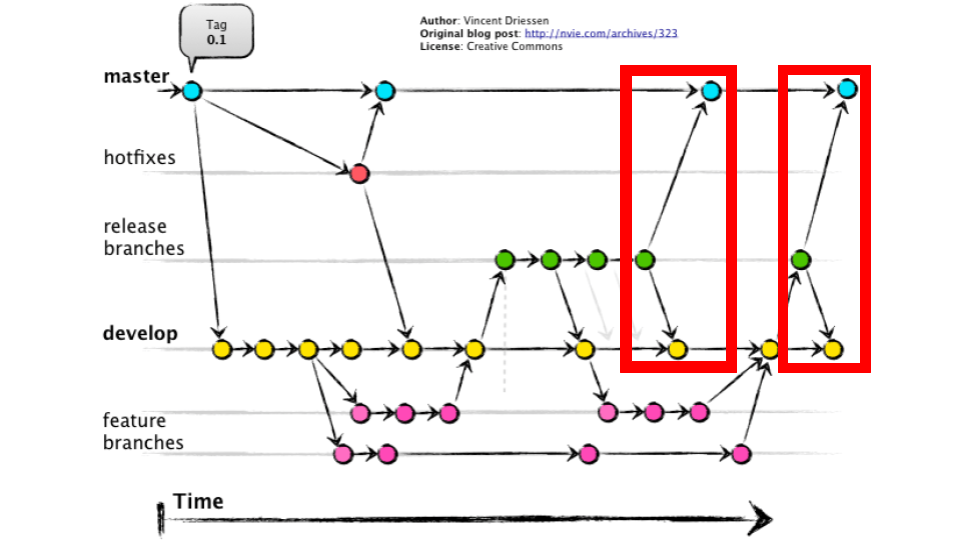 ④ After merging the release branch to the master branch, add a tag and release to production (For mobile development, submit the app to Apple Store Connect) 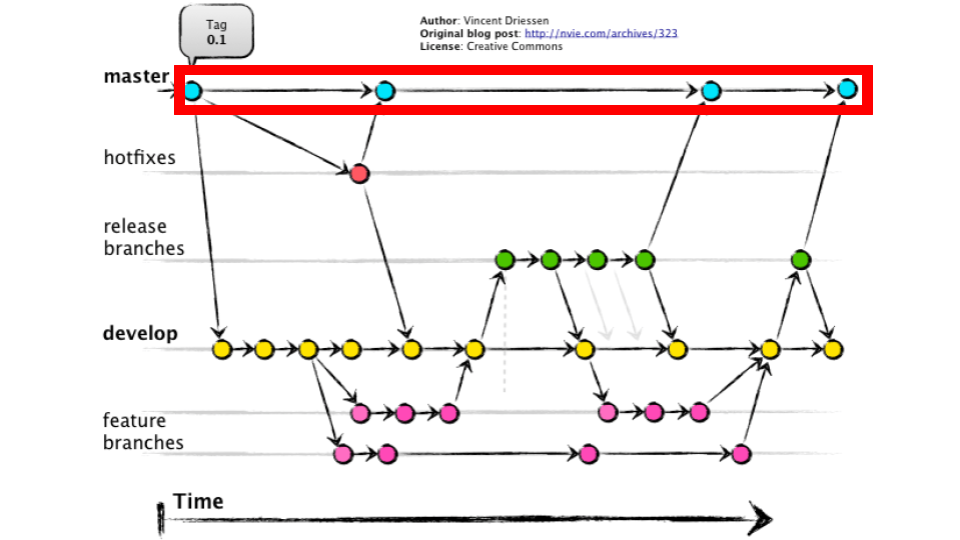 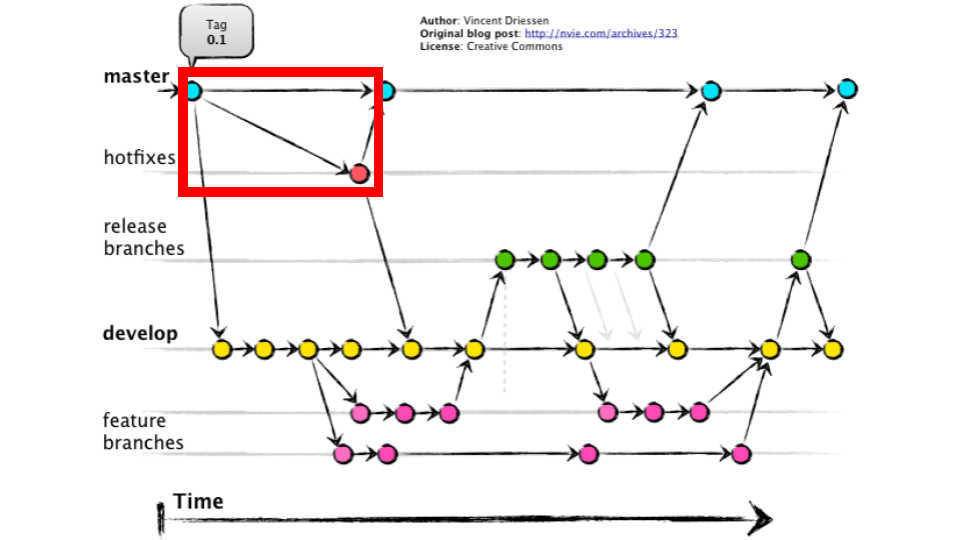 ⑥ When you have finished fixing and checking on the release branch for the hotfix and are ready to release, merge it into the master・develop branch and release it again to the production environment. 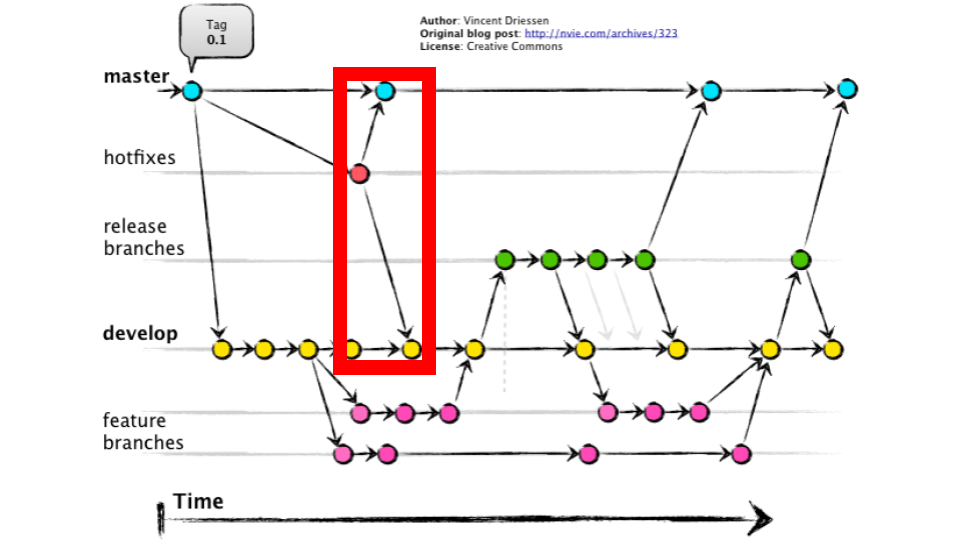 In the next section, I'll explain how we achieved continuous delivery within this Git Flow.

Release branches are often created manually, but in this case, I was able to automate the process by using GitHub Actions + Fastlane.

First of all, we want to use Semantic Versioning to specify the release version.

And below Fastlane will do the followings: 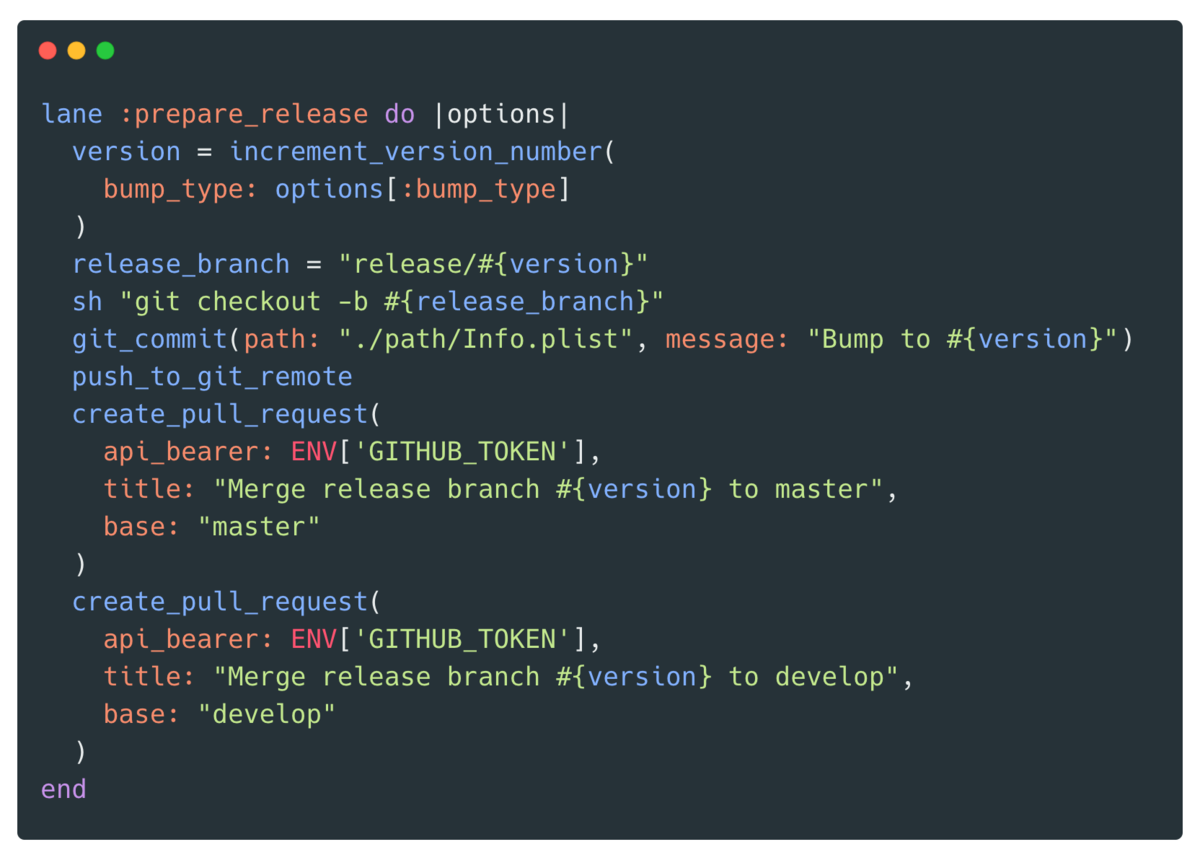 Currently, increment_version_number only supports iOS, the below article describes how to increment version number automatically for Android. 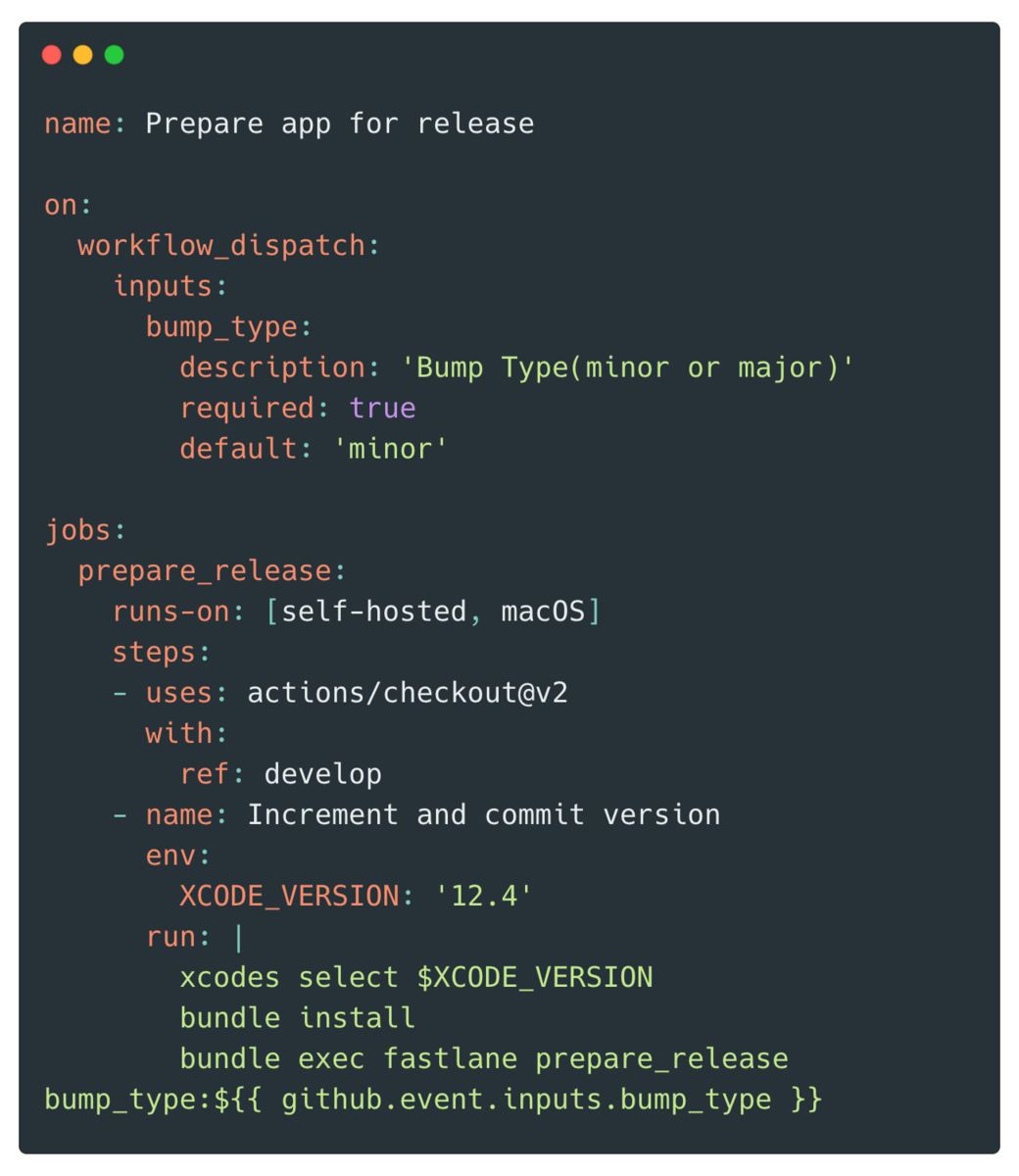 There are several types of workflow triggers in GitHub Actions, but in this case, we will use workflow_dispatch, which can be triggered manually from the GitHub Action UI, since we want to be able to run at any time.

Also since workflow_dispatch also accepts arguments, we can pass Major or Minor for this upgrade (Patch is only used for hotfix releases, so we won't use it here).

By doing this, I was able to automate the process of updating the release version and creating release branches and pull requests by triggering the workflow by specifying Major or Minor in the GitHub Actions UI.

In the previous step, two pull requests were automatically created from the release branch to the master・develop branches.

Then, as explained in section ③, when the release branch is ready to be released, you can merge it into the master・develop branches.

Of course, you can merge the two pull requests manually, but there is a possibility that you might forget to merge one of them.

To merge the two pull requests at the same time without forgetting, I created the following GitHub Actions workflow. 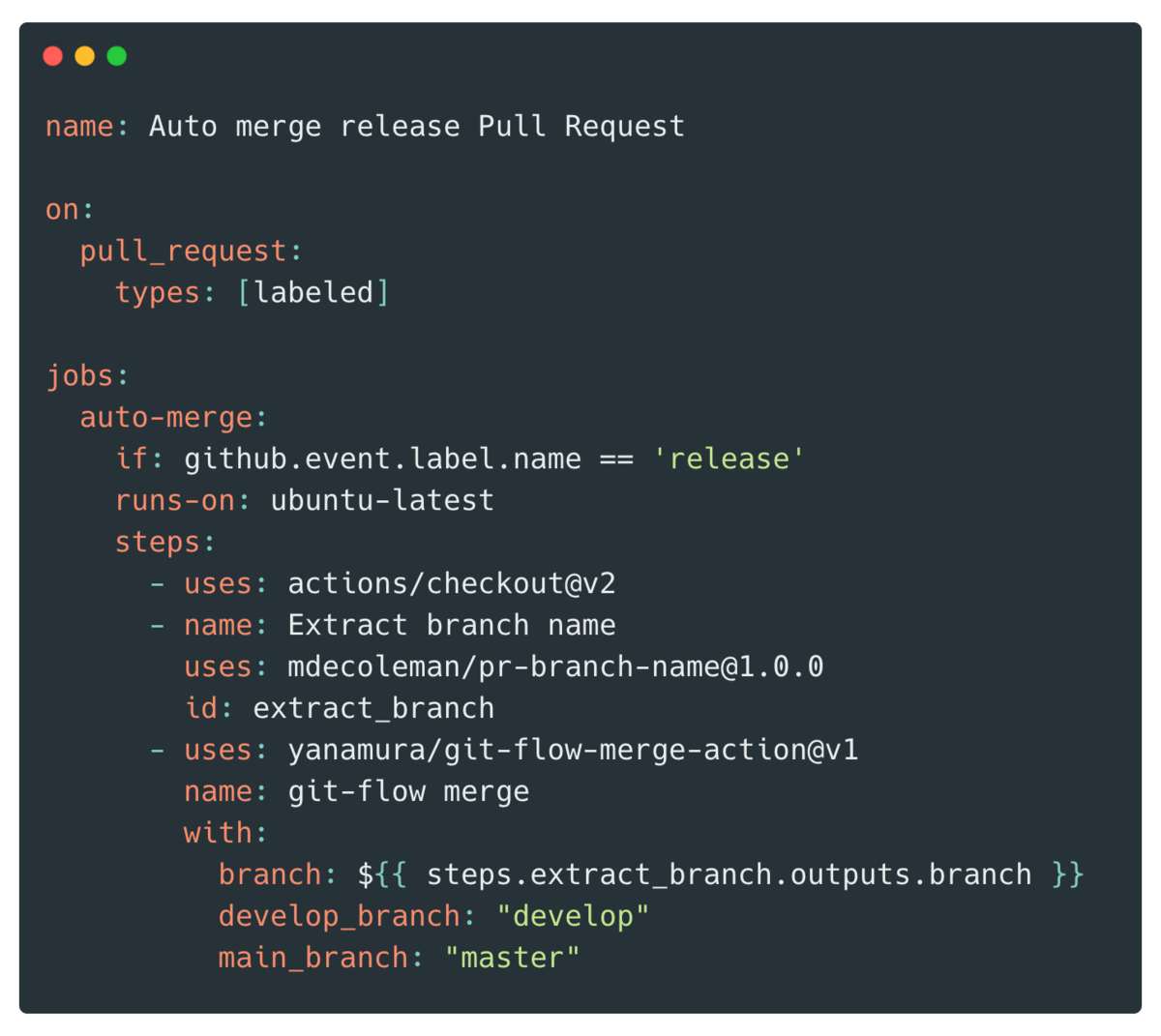 This workflow allows you to merge two pull requests for the develop and master branches at the same time if you add the label release to the pull request.

When the release branch is merged into the develop・master branches and a new commit is made in the master branch, you can create a tag and release it to the production environment as described in ⑤ in Git Flow. In the case of iOS development, this is often the time to submit to App Store Connect.

Creating a Tag & GitHub Release triggered by a commit to the master branch can be automated with the following GitHub Actions. 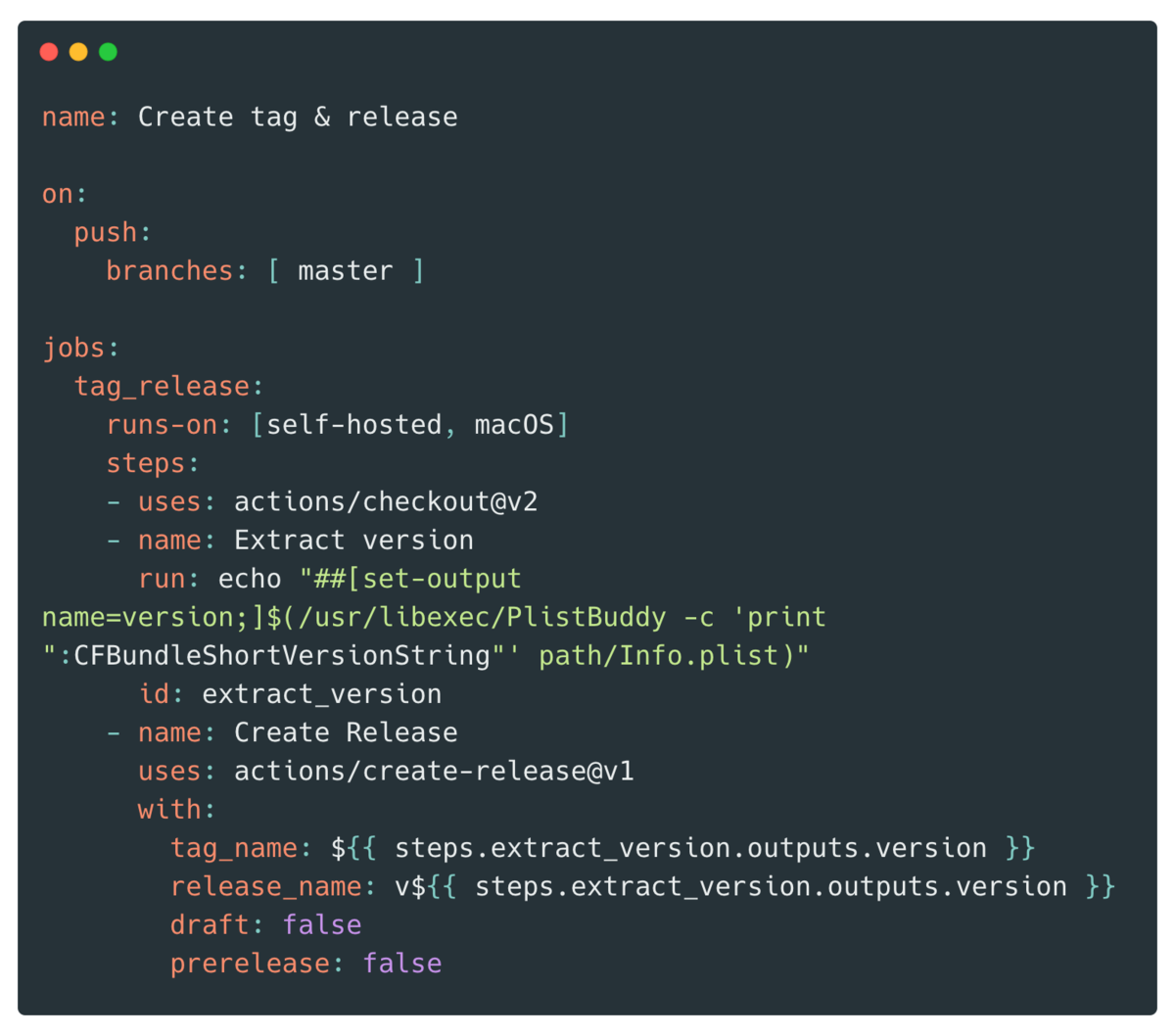 We will also build and upload the release version of the app to App Store Connect at this time. 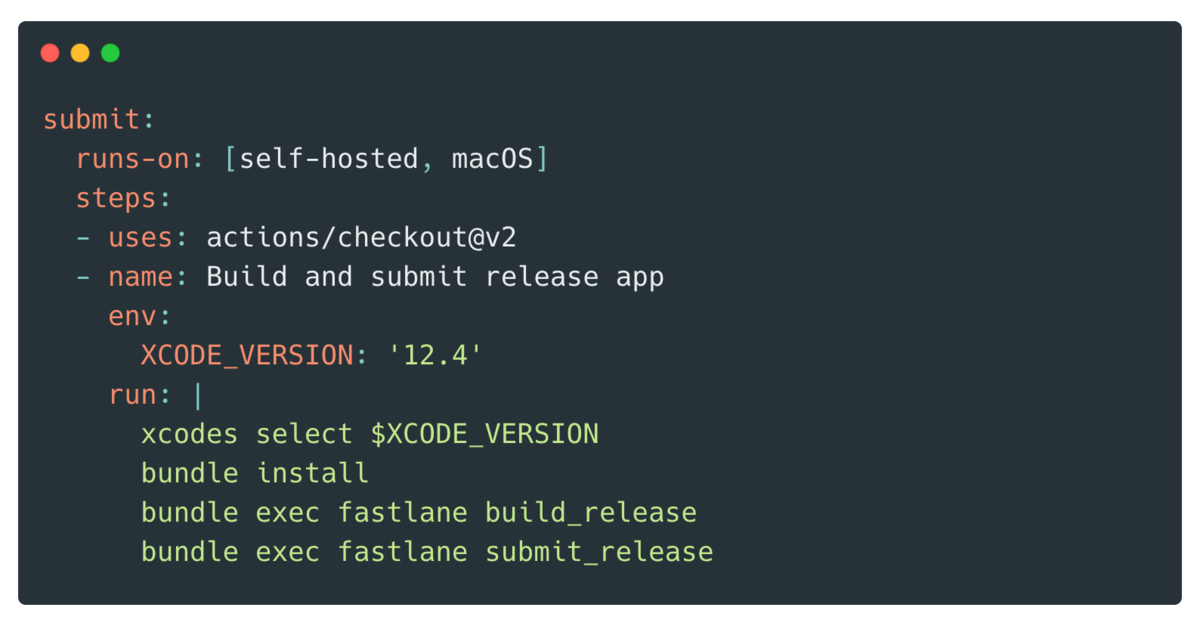 The Deliver Action allows you to not only upload to Apple Store Connect, but also upload metadata screenshots, submit, and automatically release after approval.

The above is the normal release flow.

In addition to the regular release flow, we will conduct a hotfix release if a serious bug is found after the release.

Follow the steps ⑤ and ⑥ to create a release branch for the hotfix from the master branch, and then merge it into the master/develop branch for release.

When we do a hotfix release, we follow Semantic Versioning and update only the Patch part (x.x.0 → x.x.1).

Then, in GitHub Actions, checkouts from the master branch create a release branch and Pull requests. 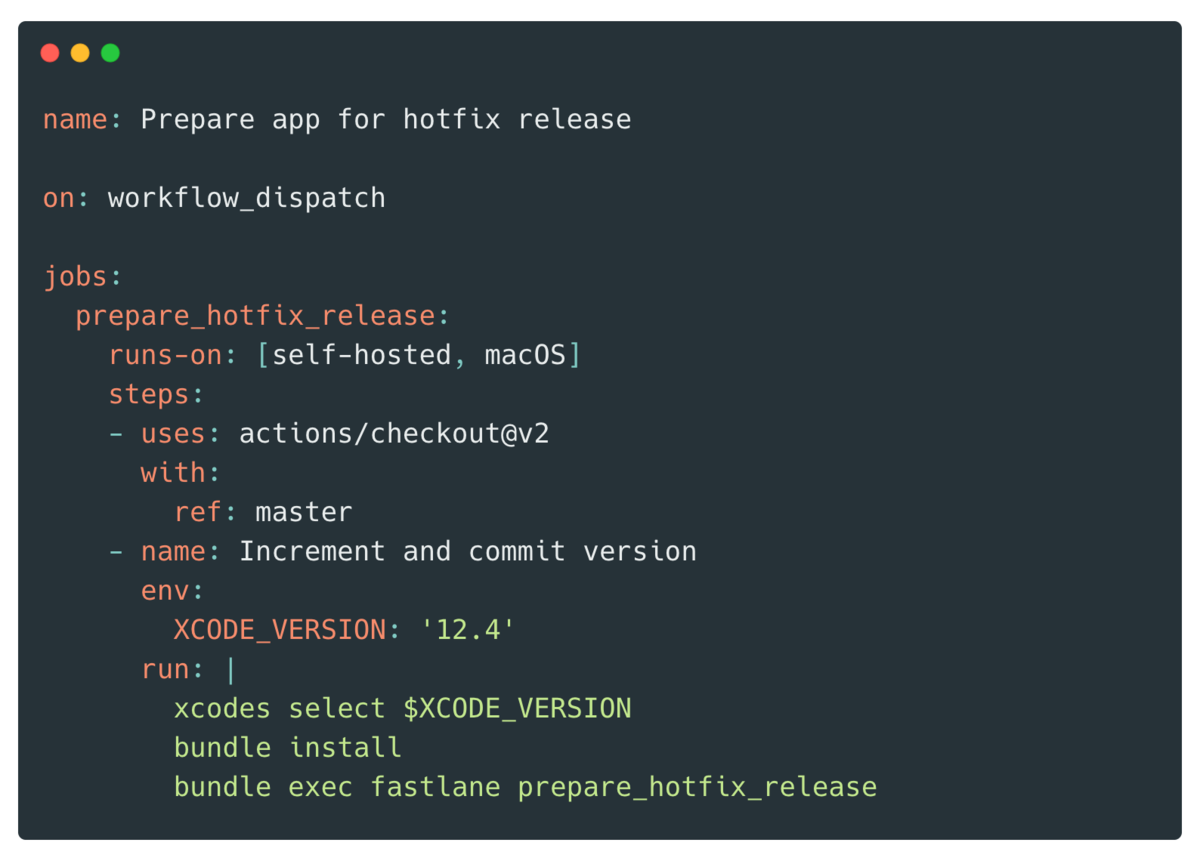 Then, after the fix and confirmation on the hotfix release branch is done, you can do the same thing as a normal release

Although not directly related to Git Flow, I will also briefly explain how to use GitHub Actions to distribute debug apps.

You can automate the building and uploading of the debug version of your app using GitHub Actions.

With Git Flow, you can trigger it when you finish feature development on the feature branch and merge it into the develop branch, or when you commit to the release branch. 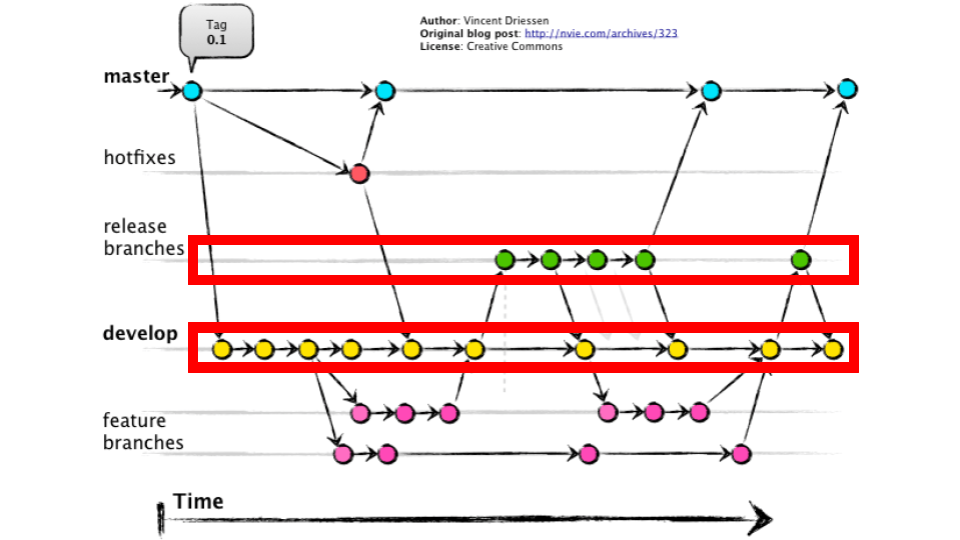 The workflow in GitHub Actions is as follows. 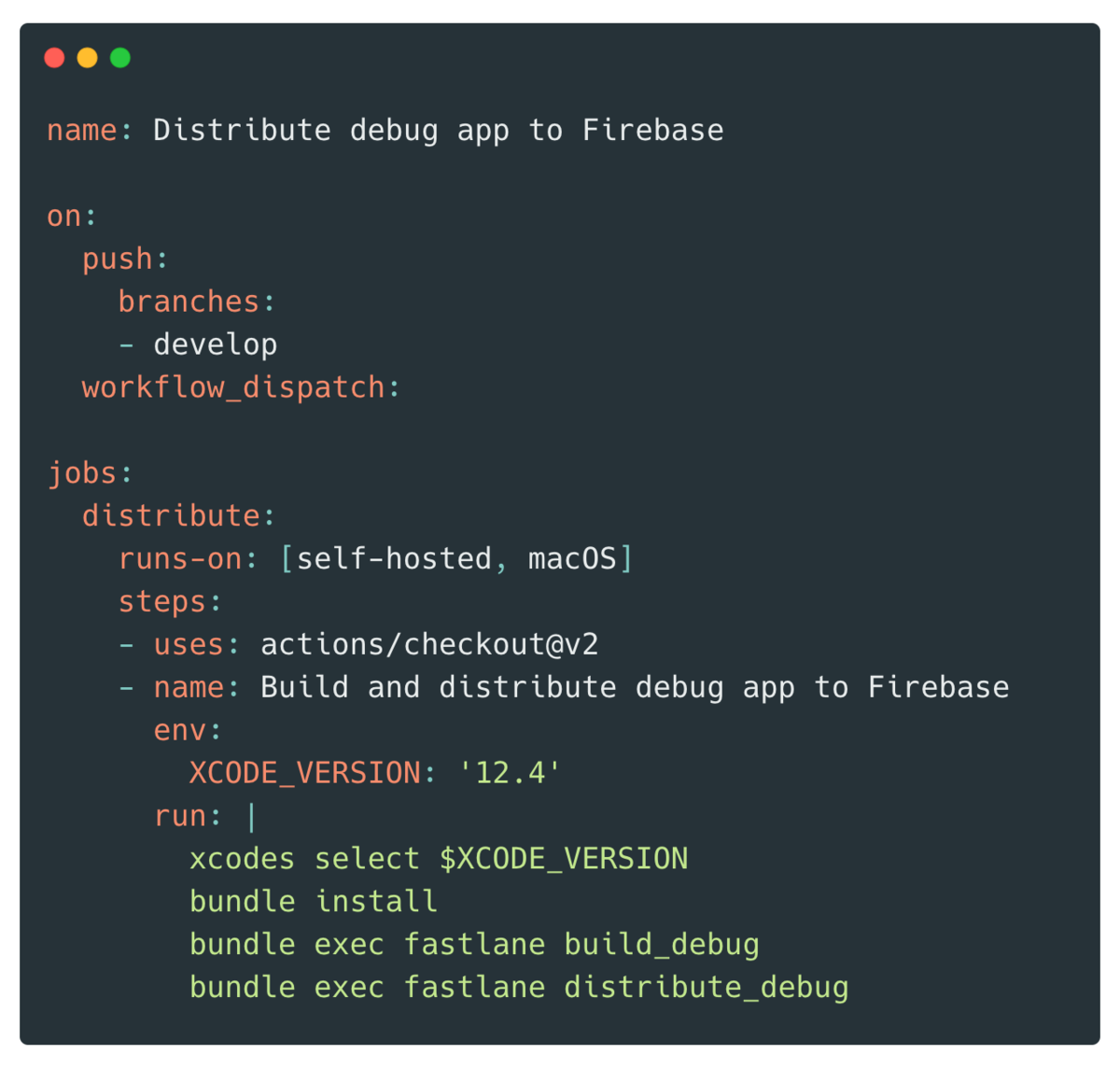 In the above workflow, we have a workflow_dispatch as a trigger, in addition to committing to a specific branch.

When you are developing a feature in ①, you may often find yourself in a situation where you don't want to merge it into the develop/release branch yet, but you want to build and distribute a specific feature branch. 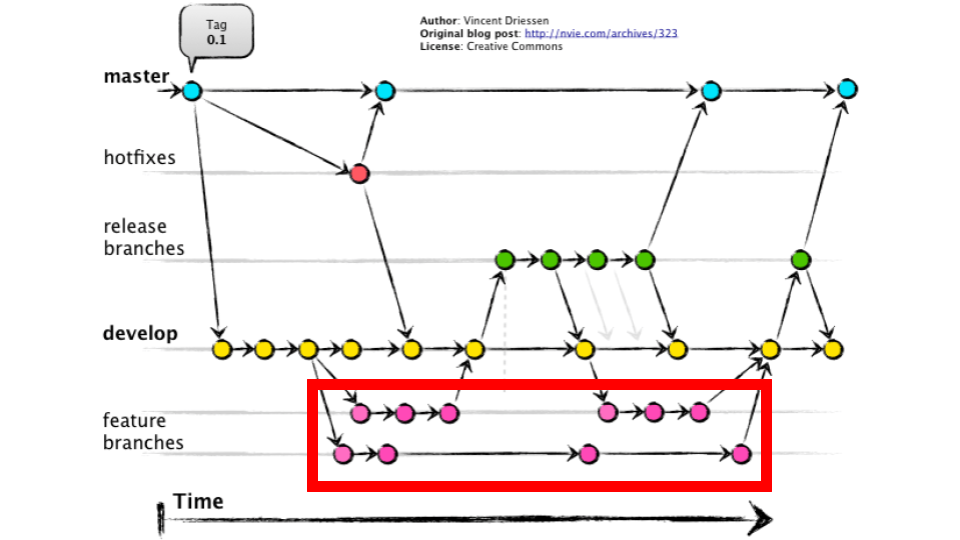 You can specify the branch and trigger workflow in GitHub Actions page, using workflow_dispatch.

This has allowed us to complete most of the work required for the release on GitHub! (Depending on how much of the work to Apple Store Connect is automated by Fastlane's Deliver action.)

While releases in mobile app development tend to be less frequent than API and front-end development, there is a lot of work that needs to be done for a release.

With this continuous delivery process, I hope to become: